Remember when I told you that we had to install new doors in the sun room a little earlier than planned?  Well as Mark was leaving for Home Depot to buy said doors, I asked if he needed me to come along.  He said no because we had already discussed what door we were going to buy.  A few minutes later my cell phone rang and it was Mark.  He was in the hardware aisle because apparently (and this is a real pro tip, you guys) when you buy a door, you also need to buy a door knob.  I’ll wait a minute while you let this sink in.

So while we had discussed the type of door we wanted, we had not considered AT ALL what type of door knob.  Don’t be like us.

You’d think that even though we hadn’t thought the knob through, this wouldn’t be a big deal because obviously we have other door knobs in the house, so we would obviously just get the same kind as we have elsewhere. Done and done.

Well here’s the thing.  While the other door knobs in the house are all the same shape (round knobs) they are not all the same finish.  There’s that sad trombone again.

Some of the door knobs are brass, however the ones on the kitchen and bathrooms are bright shiny chrome.  I would guess that originally the brass ones were bright and shiny as well, but over the years they have developed a patina from use so they are now pretty much each their own color.  Here are a few examples. 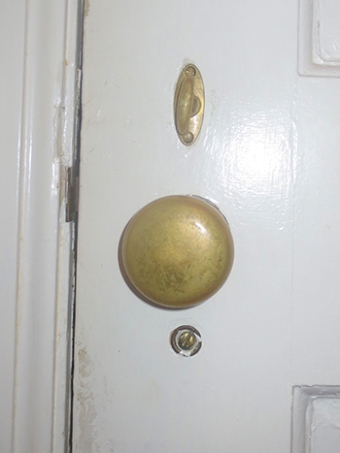 This is the inside of the front door.  This knob is still pretty brassy because if the people who lived here before us were anything like us, they didn’t use the front door very much. 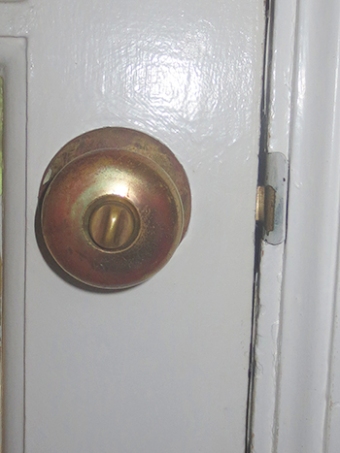 This one is a bit more weathered.  This is the door that takes you from the sun room into the living room and dining room. 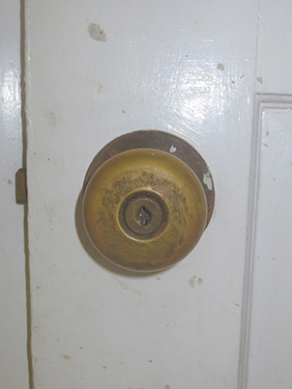 And this is the door that takes you from the sun room into the kitchen.  Also a nice patina, no?  So it’s settled then, we’ll go with a hand worn brass 1948 knob!  They don’t sell those?  Really?  Well what’s the next best thing?

Wow.  Do you have anything a little less brass?

Okay, that’s ok.  But in person since they are new, they don’t really match as well as one would hope.  *Sigh.

Decisions like this are hard for me.  I actually tend to be a little “matchy-matchy” so it bothers me when things don’t exactly match.  My theory is that if they aren’t doing to be a complete match, I don’t want them to be close.  I would rather go a different direction entirely.  And that’s how I wound up eyeing this guy.

Although we don’t have any other oil rubbed bronze door knobs in the house, we do have a couple of lights/lamps with that finish in the living/dining room and we anticipate that we will have some in the sun room as well.

So, after more thought than one should really put into this type of decision, we decided to go with oil rubbed bronze knobs on the two new sun room doors.  Here’s what they look like up close.

And here’s what they look like on the whole door.

So as the title of this post implies, the full range of door knobs in our house is anything but “matchy-matchy.”  At least all of the knobs are the same rounded style. We actually like that the variance in metal tones conveys the age and “character” of the house. Perhaps before we try and sell it we will look into trying to unify the knobs, but for now our mis-mash suits us just fine. And I am glad to have that big decision behind me!

Hope you have a good weekend you guys.  We’ll be in the sun room trimming and sanding.  Feel free to stop by!