For me this best part about this sun room reno is it that, for the first time, I am getting to decorate a room completely from scratch. So for awhile now I have been thinking about how I want the room to look and feel. Being a California/Hawaii girl, I’m not used to sun rooms. What I am familiar with are beautiful patios/lanais that feel like rooms even though they are entirely outdoors, like these. 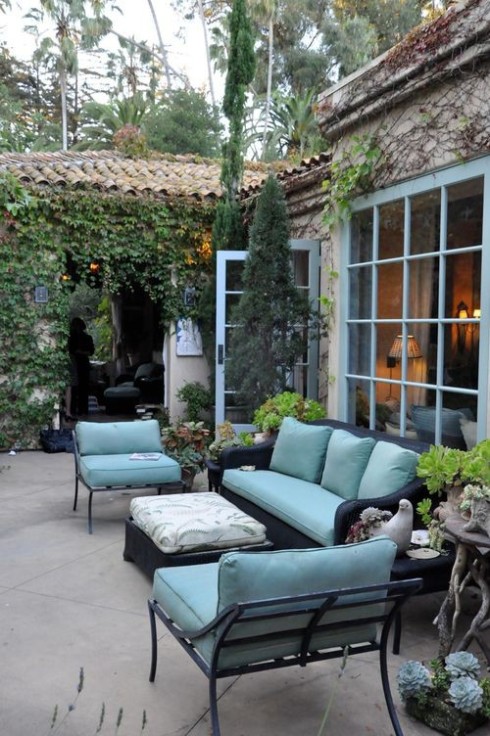 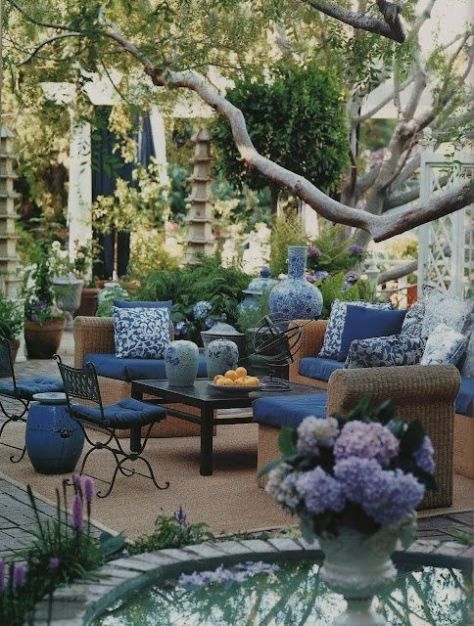 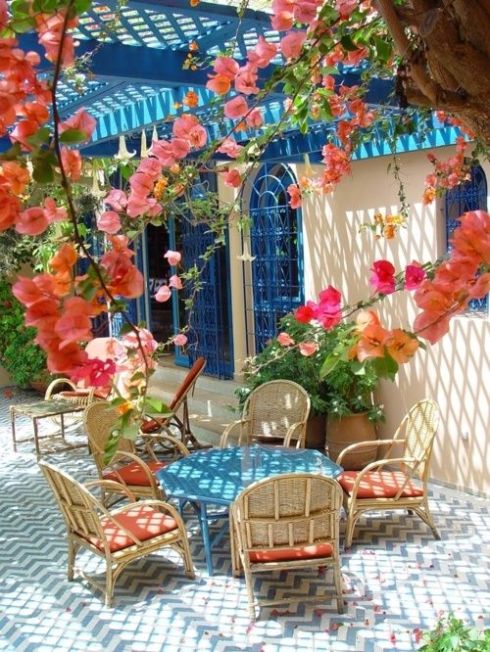 So my goal is to make the sun room feel like a one of these backyard patios, except with walls around it. And while I want to draw on the inspiration of west coast/hawaiian outdoor spaces, I don’t want the room to feel out of place in my east coast cape cod, so I want to make sure I am incorporating regional styles and trends. Lastly, I want the room to feel like a natural extension of the rest of the house and not like an add-on, which is what it has felt like until now.

So that’s a little background on where I’m coming from as I start to talk about paint choices. The first decision to be made paint-wise is the ceiling color. I have learned that in the south and mid-atlantic, blue ceilings are a popular choice for sun rooms and screened-in porches. Some say they help keep bugs away. I like the idea not only because it is a local trend, but also because blue = sky and I thought it would help give the room that patio feel I am going for. Luckily, Mark agreed with this logic, so blue ceiling it is!

But as I mentioned before, blue is hard man!  I’ve made many a blue paint mistake in the past so this time I wanted to be extra careful and take my time choosing what I hope will be just the right tint for the ceiling. We started with lots of paint chips.

And narrowed it down to the colors we liked in three not-at-all scientific catagories; grey blues, blue blues, and green blues. Then we taped our favorites to the wall and thought about it. 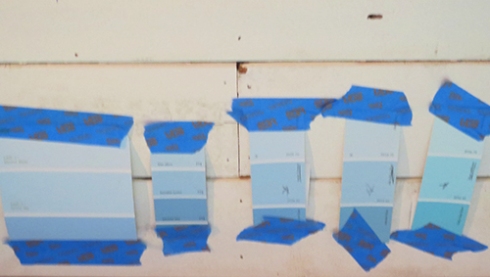 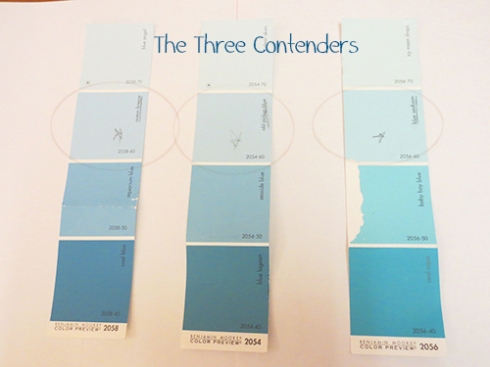 Pretty much across the board, every color we considered was from the second chip on the strip. We felt that the top chip was too light and anything below the second was too dark. The names of the three selected chips above are (from left to right) Ocean Breeze, Old Pickup Blue, and Blue Seafoam. They are all from Benjamin Moore’s Color Preview line and  they are pretty similar. The chips numbers are 2058, 2054, and 2056 respectively. Ocean Breeze is the most true blue and Blue Seafoam is the most green blue, with Old Pickup Blue falling somewhere in the middle.

We grabbed samples at Home Depot and painted swatches of each on the sun room ceiling. 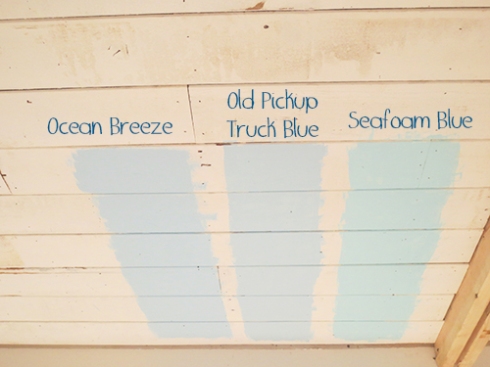 What do you think? We had several people over on the Fourth and everyone seemed to think that the middle swatch (Old Pickup Blue) was our Goldilocks color; not too green, not too blue, but juuuust right. And you know what? We totally agreed! In the photo above it doesn’t look all the green but here’s a look at the full chip of colors in the family.

If you look at the darker colors on the chip, there’s definitely alot of green them. In fact, “Beau Green” looks alot like “Dragonfly” which is the color of our bookshelves. 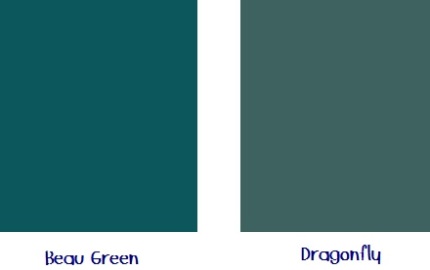 Since we also have a light blue on the living/dining room walls, (BM’s Constellation if you’re curious) I am hopeful they the three blues look cohesive and don’t compete with one another.

So that’s where we are. Starting a new and hopefully long-term relationship with an Old Pickup Truck. We’ve got some prep work still to do before we can get to painting, but we are still aiming to be done by the end of the weekend.

What do you think? Did we make the right call?  Would you have preferred a different shade? Or are you staying out of it because blues scare you too?